All of us at the Commonweal were thrilled when Ivey Award-winning director Craig Johnson agreed to join us this year to fill the director’s chair for our world-premiere production of Dracula: Prince of Blood by Scott Dixon. Craig’s sense of humor, timing, focused eye for creating beautiful stage pictures and his bold imagination are all ideal for a story such as Dracula. As we approached the opening of the production in early September, Craig shared his personal thoughts about the story, the characters and Scott’s original take on literature’s most seductive vampire. Here are those thoughts.

An Iconic Horror Story in a Ripe Retelling The story of the Transylvanian count may have its origins in the legends surrounding Vlad III Dracula, a Romanian folk hero who, in the 1400s, staved off the invading Ottoman Turks, killing perhaps as many as 100,000 enemies and earning the nickname “Vlad the Impaler.” While Stoker includes some historical references, his tale of the aging vampire needing to escape to England in search of fresh blood is entirely original. In fact, the intense yet courtly charisma of the title character was probably inspired by Bram Stoker’s boss—the great Victorian actor Sir Henry Irving, who employed Stoker as his personal assistant for many years.

That theatrical connection may be what makes Dracula so dramatically compelling on stage, why the story is always ripe for retelling, as we have with this premiere adaptation by Commonweal’s own Scott Dixon. The gripping plot is all here as is the vivid gallery of characters—the doomed Lucy, the wise (and slightly eccentric) Professor van Helsing, the tortured asylum inmate Renfield, and of course the powerful and seductive Count Dracula himself. Scott’s script has highlighted the psychological and thematic points of the story, so you can look for the tussle between science and faith, the restrictive role of women in society, the costs of repressing our sexuality, the guarded fear of the outsider. On the other hand, you can just lean back and thrill to a bloody good story! 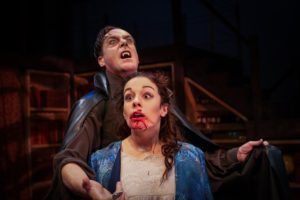 And from the playwright:

When I first thought about adapting Dracula, I thought—there are hundreds of Dracula scripts out there, who needs one more? But the idea just wouldn’t let me go. I soon discovered that the enduring power of Bram Stoker’s story is that it’s like a jewel with so many facets, so many different ways of looking at it, and so yes, there is room for one more play about Dracula if you infuse it with some distinctive twists.

And it’s a task Scott is well-suited for. Besides being an accomplished playwright, he is also an author of horror and dark fantasy stories. News about all of his current and upcoming projects can be found online at Darkly Dixon or The Desk of Scott Dixon.